What’s new this Fourth of July at The Popcorn Factory? Kaboom Kapop Sweepstakes!! Are you celebrating the Fourth with a pop of red, white and blue? Upload a photo of your 4th of July and patriotic decorations for the Sweeps page!

Your Kaboom Kapop photo must be just decorations without any individual in it. You can customize your photo with a title. Follow the link here for the official rules, sign up form and a chance to win delicious popcorn from The PopcornFactory! http://bit.ly/kaboomkapop On July 7, 2018 three winners will be randomly selected. Have fun decorating everyone!

We’re loving the spectacular photos from our fans!

Fireworks, cakes, pets, door wreaths and Kaboom Kapop diy…just to name a few.  Super cute and inspiring for Independence Day.  Have you seen the sweetly decorated desserts? Keep sharing and sending your pop of red white and blue photos . We’ll be posting until the end of day on July 6.

Be sure to check back on our Facebook page after the Sweepstakes where we will announce the winners. Best of luck to everyone who entered. We hope you win the yummy kapopcorn!

We wish all our spectacular fans a fun-filled Fourth!

Add a patriotic touch to your Memorial Day or 4th of July celebration with red, white and blue tableware! If you don’t happen to have it on-hand, Celebrations.com has a great trick for creating your own – simply use paint! Use disposable plates and cups that you already have on hand for this simple idea, then fill popcorn – regular or our special patriotic popcorn – for the perfect party spread! 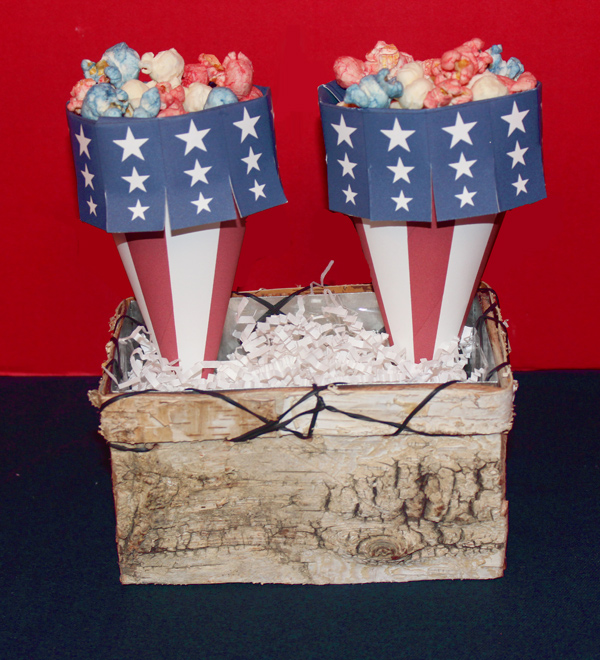 Did you know that each and every popcorn kernel sold by The Popcorn Factory is grown and produced right here in the Unites States of America? Celebrate the land of the free’s birthday with the ULTIMATE patriotic snack – red, white and blue popcorn!

Print out the patriotic paper cone printables onto medium weight paper. You will need 2 copies of the stripe file for every 1 copy of the star file. Once printed, cut out the design. 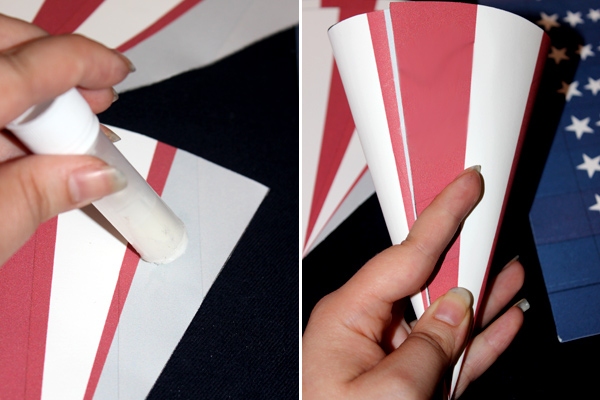 Next, apply glue or tape to the grey area of the striped printable. Roll the cone onto itself so the red end of the cone overlaps the grey area. Hold down for 3-5 seconds to secure the glue. Set the cone aside.

Now, take the starry blue strip and fold along the black solid line. Then, use scissors to cut along the dotted grey lines; there are cut lines on both sides of the strip.

Once your strip is cut and folded, apply glue or tape to the back of the tabs you have created (the ones that are blue sans stars on the front). Slowly begin attaching those tabs to the inside of the cone, holding down for a few seconds after each tab to secure. Do this until the entire blue strip is attached to the cone.

Use your finger to slightly raise the edge of each tab for a fun effect. Now, your patriotic paper cones are ready to party! 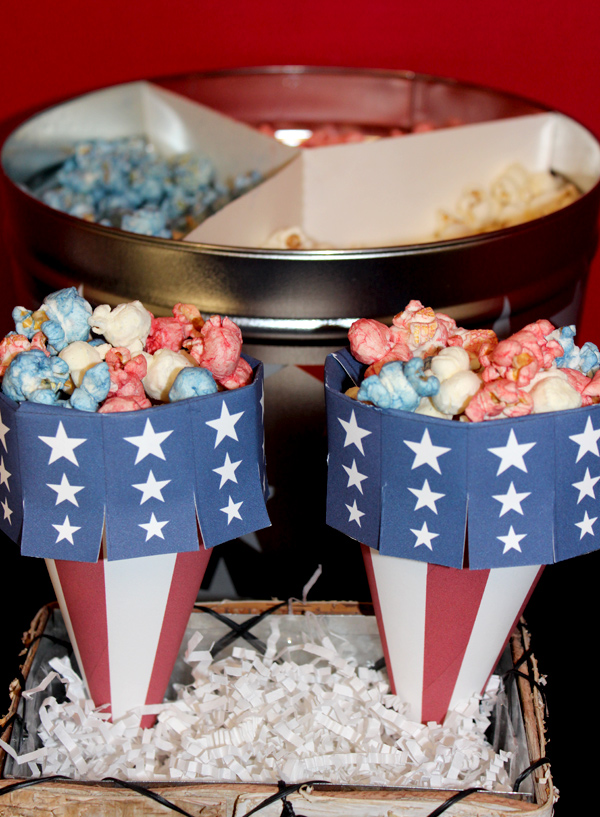