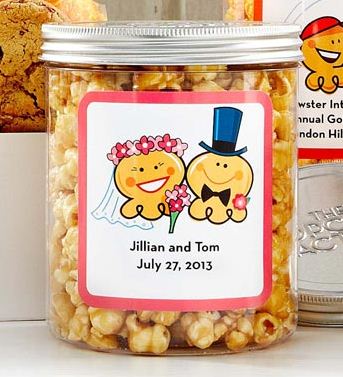 Have a big day coming up? Whether you’re celebrating a Sweet 16, a wedding, a birthday or an annual family trip, nothing makes your present pop out from the crowd more than a customized label for your gourmet popcorn tins! So the next time you want to make the day extra-special, try one of these two awesome ways to personalize your snack gifts!

These small custom canisters send a big message that’ll make your big event even more memorable. Each set of four canisters comes with adorably illustrated logos that can be tailored with the name and date of your event. Choose from a selection of three out-of-this-world popcorn flavors to fill your canisters with: caramel, Cornfusion (a blend of caramel, butter and cheese popcorn) and pink passion fruit popcorn. Then, pick the label theme that best fits your special day: baseball, congrats, golf, birthday, patriotic, party, summer, or wedding. These pint-sized snacks make the perfect party favors or miniature gifts for the guests of honor! 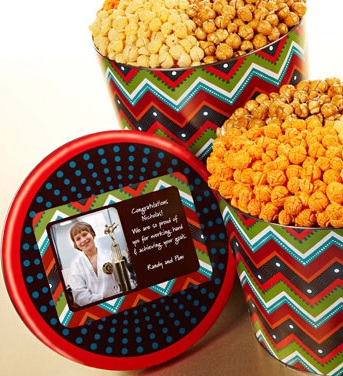 These popcorn tins don’t just come in super-stylish designs. You can make them even more unique for your big occasion by adding a custom photo label on the lid. There are loads of tin designs to choose from, including flowers, butterflies, patriotic stars, birthday party hats and more. Plus they come filled to the brim with mouthwatering gourmet popcorn flavors (like cheese, white cheddar, and almond pecan, just to name a few), pretzels, cookies, candy and more! Once you’ve chosen your tin and the snacks you want to fill it with, put the final personal touch on your present: a completely customized label. Whether you add a photo, a message or both, this is one keepsake gift that will last long after all those delicious snacks are gone!

How will you choose to personalize your popcorn gifts for your next big celebration? 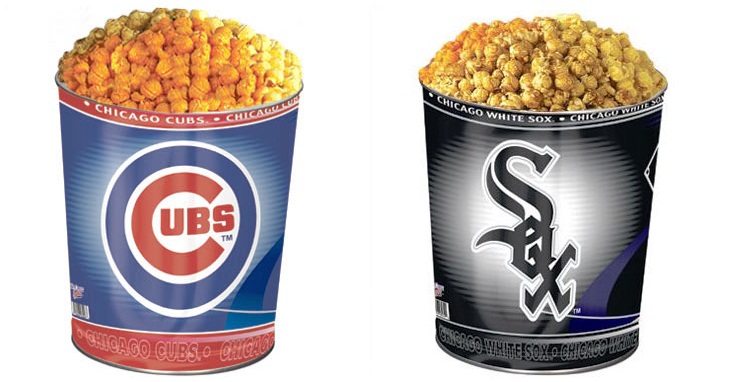 We here at The Popcorn Factory are proud to be from Chicago. What’s not to love? It’s such a powerhouse city that not one, but two grand-slammin’ MLB teams call it home. The electrifying crosstown rivalry between the Chicago Cubs and the Chicago White Sox has been sending shocks of high-voltage excitement through fans’ blood for ages. So grab a Cubs or Sox 3-Flavor Baseball Popcorn Tin and join in on the action: We’ve got all the fun facts you need to know about the Windy City’s most exhilarating teams! 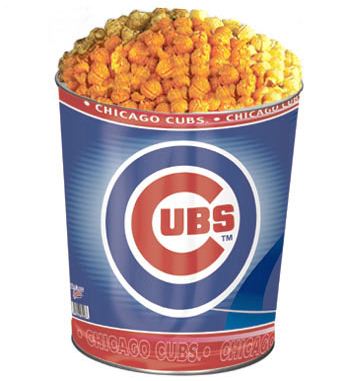 Today, the Cubs are one of the top five grossing teams in the MLB.

The Chicago Cubs are one of four major league baseball teams that do not have mascots.

The Cubs’ logo has been changed so many times over the years that no one really knows who designed it.

Before they were known as the Cubs, the team was also called the Chicago White Stockings, the Colts, the Black Stockings, the Orphans, the Rainmakers and the Cowboys. They didn’t get their modern-day name until 1902, when a newspaper reporter used the nickname “Cubs” to refer to the team in an article.

Every time the Cubs win a game at Wrigley Field, a flag printed with the letter “W” for “Win” is hoisted high above the scoreboard.

The Cubs were the first team ever to win two back-to-back World Series championships. They won their first series in 1907 and claimed victory again in 1908. However, they haven’t won a championship since then, though they did win National League titles in 2007 and 2008.

The Cubs didn’t start playing at Wrigley Field until 1916. They called five different parks home before they settled at Wrigley: 23rd Street Grounds, Lakefront Park, West Side Park, South Side Park, and West Side Grounds.

The first baseball game to ever be covered on the radio was aired on October 1, 1924, when the Cubs defeated the White Sox 10-7.

There are 42,157 seats in Wrigley Field, including standing room tickets.

On July 27, 1930, Wrigley Field hosted its biggest crowd ever: 51,556 fans. There were so many people that, in order to make everyone fit, visitors were allowed to stand along the outfield’s warning track.

Lights weren’t installed in Wrigley Field until after 1942, when the initial fixtures were donated to the war effort after the attack on Pearl Harbor.

In Game 4 of the 1945 World Series against the Detroit Tigers, the Cubs didn’t allow William Sianis—owner of the Billy Goat Tavern—to bring his lucky goat into Wrigley Field. Sianis angrily declared that the Cubs would never win a World Series again. So far, what’s known as “The Curse of the Billy Goat” has come true: The Cubs lost the series that year and every year after that.

The first regular season Cubs game to be broadcast on television was aired on April 20, 1946.

Sammy Sosa hit 33 home runs in his first season with the Cubs. Before he played with the Cubs, he hit 28 runs with the White Sox in fewer than three seasons. END_OF_DOCUMENT_TOKEN_TO_BE_REPLACED

Welcome back for another exciting week of Unique Father’s Day Gifts!

If finding the perfect gift for dad seems like it’s always the hardest thing to do, keep checking back with us! We have great gift ideas that Dad will both love and be impressed with… let’s jump in!

Anyone can buy a gift, but it’s the special touches you put to it that make it a gift truly worth giving. For this Father’s Day, make your gift really count with your own personal touch and time. We know that dad is sure to love his new tie, coffee mug, or Nook, but we bet what he would love most is some quality time spent together this summer.

Summertime usually means barbeques, fishing, enjoying the great outdoors, and most importantly for sports fans, summer baseball games! Baseball is the great American-pastime, a time to enjoy the great weather, eat hot dogs and peanuts until you’re stuffed and watching a bunch of guys hit a leather ball with a stick! Okay, admittedly some of us don’t really understand the whole idea behind baseball and really only attend for the food and crowd, but we know Dad would really enjoy!

So if your dad is the biggest sports buff you know, secure two tickets for you and Pop to catch his favorite MLB team play. As a local Chicagoland company, we’ll let our Dads battle it out over which team to see between the Cubs and White Sox!

Secure your tickets now and see when your local team is playing here.

Make the gift a full package and combine it with a shirt or jersey from Dad’s favorite team, and let’s not forget a tin of his soon to be favorite gourmet popcorn in a decorated MLB sports tin!

Is your Dad a Northsider or Southsider? Still basking in the Cardinals win? Never missing a Rangers’ game on TV? We’ve got all the MLB sports tins he needs that are packed with fresh gourmet popcorn in our traditional three flavors. His mouth will water with our real butter, cheese and secret recipe caramel popcorn combination. Plus, when he’s finished his gourmet treat, he can reuse his MLB designed tin for years to come!

Check out our whole collection here.

Have a Happy Father’s Day from The Popcorn Factory! And don’t forget to Celebrate Deliciously.